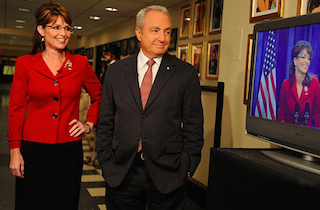 In addition to the 49 former cast members and hosts revealed during the Super Bowl, you can add one more name to the list of people scheduled to appear on next weekend’s Saturday Night Live 40th anniversary special: Sarah Palin.

People magazine is reporting that Palin, who appeared on the show alongside Tina Fey and Amy Poehler in October 2008, will return next Sunday to “participate” in some fashion in the big reunion special. The invitation came from executive producer Lorne Michaels and a “source close to Palin” confirmed that she accepted.

Last year, Palin spoke to writers Tom Shales and James Miller for the latest update to their oral history of the show, Live from New York

“I think SNL is egotistical if they believe that it was truly an effect on maybe the public debate about who should lead the country in the next four years,” she said of the show’s supposed political influence. As for why she decided to appear the first time, Palin added, “I know that they portrayed me as an idiot, and I hated that, and I wanted to come on the show and counter some of that.”

“If I ran into Tina Fey again today, I would say: ‘You need to at least pay for my kids’ braces or something from all the money that you made off of pretending that you’re me!” Palin said of the comedian who embodied her so expertly seven years ago. “My goodness, you capitalized on that! Can’t you contribute a little bit? Jeez!’”

The former Alaska governor will likely get that chance to confront Fey, either on screen or off, next week.

Watch Palin’s cameo in the 2008 cold open below, via NBC: