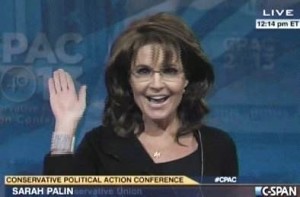 Former Alaska Governor Sarah Palin delivered the most scathing and electric rebuke of President Obama at CPAC yet by calling him a liar along with a litany of other one liner insults during her lunchtime address that repeatedly brought the crowd to its feet. Later in her speech Palin unleashed her wrath on Karl Rove and the assorted political consultants that she so despises.

After being introduced by Senator Ted Cruz in a surprise appearance, Palin unleashed a laundry list of zingers in Obama’s direction on guns, criticizing calls for a ban assault weapons and expanded background checks.

“It’s not about the bad guys, it’s all about the led. That chunk of metal solely did the crime,” she said, snarkly ripping the president’s gun proposals.

“That’s like saying that pork made me fat,” Palin said, moving quickly to her next zinger.

Palin trashed Obama for his nearly all of his policies from guns to the budget to “free Obamaphones and prophylactics.” At one point she ripped Obama’s budgetary practices, calling him a liar and echoing Congressman Joe Wilson‘s 2009 outburst. “Barack Obama promised the most transparent administration ever. Barack Obama, you lie!”she said, again drawing applause and cheers.

At one point Palin, a former reality TV star, ripped Washington as a whole for lacking “leadership” and being a “reality television show.”

Some of her other zingers:

After she completed her thorough trashing of the president she took a dig at New York Mayor Michael Bloomberg by drinking a big gulp on stage and expressing her disgust at the soda band that he attempted to implement. 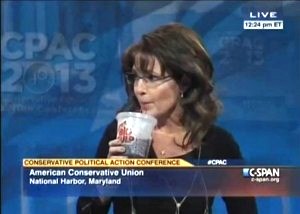 Still, she was not done as the consultant class and Karl Rover were next in her line of fire. Palin delivered a scathing rebuke of the failed 2012 presidential campaign of Mitt Romney without mentioning him or any of the consultants involved by name just saying that they continue to make millions even though they repeatedly lose elections.

“If these experts keep losing elections keep raking in millions, if they feel that strongly about who should run in this party they should buck up and run or stay in the truck. The architects can head on back to the Lone Star State and put their name on the ballot,” she said in a clear reference to Rove.

This was Palin’s second CPAC appearance.

Watch full speech below via CSPAN: