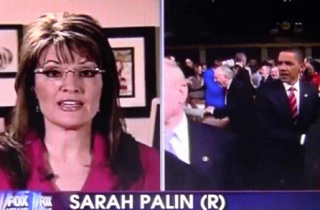 Over the weekend, former Governor Sarah Palin (R-AK) appeared on Fox News’ America’s News HQ to discuss President Obama‘s response to the Edward Snowden leaks, which Palin praised, but which she also believes Snowden should be punished for. Palin delivered a cracker of a monologue, in which she accused the President of showing “the community organizer” in him, and used an adjective that has liberals accusing her of racism. While they may have had a strong case for Palin’s “shuck and jive” remarks last October, I’m afraid Palin’s critics don’t have much of a leg to stand on this time.

In case you missed it, this is the segment that has liberals in an uproar:

The accusations of racism flew fast and furious over the weekend, starting with Jason Easley of PoliticusUSA, who took exception to Palin’s repetitive use of “community organizer,” and the adjective in question:

Sarah Palin welcomed herself back to Fox News today with an ugly racist rant that culminated with her breaking out Jim Crow stereotypes and calling President Obama lackadaisical.

The stereotype of the lackadaisical African-American goes back to slavery and Jim Crow. According to the 1937 book Class and Caste in a Southern Town, “It is a common error in judging lower class Negroes to compare them unfavorably with foreign immigrants, stressing the lackadaisical Negro work habits, and referring to the energy and zeal for advancement of a foreign peasantry.”

In the light of my family memoir Into the Briar Patch, I can see how this stereotype was born during slavery and Jim Crow. Growing up, I learned that the South’s rich vocabulary for laziness was often applied to African-Americans: shiftless, no-account, trifling, good-for-nothing, lackadaisical, half-hearted, slow as molasses.

In the South, slaves labored in the fields from sunup to sundown. Yet somehow the blacks were the ones who got called lazy.

What a devastating irony.

Does this contradictory stereotype make any sense? Not factually. Psychologically, though, it serves the culture of slavery, Jim Crow, segregation, and today’s racism.

Fair enough. I don’t think any honest person would dispute that “lackadaisical” is a barely-coded euphemism deployed to evoke the stereotype Regan identifies. But on the other hand, what are white people to do if they need to describe a person who happens to be black, but also happens to be “lackadaisical?” In order to believe that this is racist, you’d have to believe that the description was inaccurate, and was only being used to evoke the stereotype. For example, if you called a president “lackadaisical” about pursuing leakers, even though every one of that president’s critics agreed that he was the most aggressive leak-punisher in history, and had prosecuted more leakers than all other presidents combined. Then, you could make that argument.

Unfortunately for Palin’s liberal critics, she didn’t actually say the President was “lackadaisical,” but rather, used a different adjective that is surprisingly popular in cable news:

That’s right, folks, Sarah Palin said “Lax-a-daisical,” which sounds like it would be a great slogan for Activia, but beyond that, is not a real word. Neither is “mole-ify,” but it should be.

Before you even start, I know that there will be Sarah Palin fans who will think that I’m just nitpicking, that I’m just looking for an excuse to make fun of Sarah Palin (but I used Chris Matthews and James Carville in that montage, too!), and who will say “Come on, you know exactly what she meant to say!”

That last part, I confess, is true. I do know exactly what she meant to say.