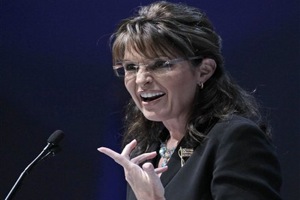 Sarah Palin gave her highly anticipated NRA speech yesterday, and, in friendly company, she felt comfortable enough to read “you might be a redneck if…” jokes off of her Blackberry and give dire warnings that President Barack Obama and Speaker Nancy Pelosi were only waiting to accrue enough political capital to take all gun and ammunition rights away.

Interjecting her own personal anecdotes to give credibility to the jokes, Palin opened her speech with an anecdote on jokes she was told about her background and read a list of them off her Blackberry. The jokes were “redneck” identification cues like “if you think Walmart is expensive” and “if you’ve ever had Thanksgiving dinner on a ping-pong table” (“Who hasn’t?”). She found the resemblances uncanny, adding, “What, did they open my diaries?”

Her tone became significantly more grave, however, when she turned to the matter at hand: gun rights. While she believed the current political climate was such that the Second Amendment was, for the time, safe, she added that its enemies in Washington were simply biding their time until the right moment came along to abolish them:

“President Obama and his allies, like Nancy Pelosi, have been relatively quiet on the gun control front, not because they don’t want to limit your rights, but becasue they’re afraid of the political consequences. Don’t doubt for a minute that if they thought they could get away with it they would ban guns and ban ammunition, and gut the Second Amendment.”

Highlights from the speech below: