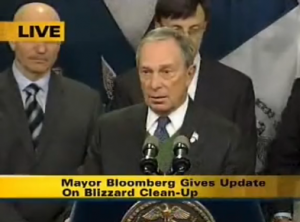 In case you hadn’t heard, the snow in New York is still kind of a disaster (for proof, check out any of the Twitter updates breathlessly claiming to have the DEFINITIVE picture of snow-covered Brooklyn streets or the simple fact that this post is being written from my childhood bedroom in New Jersey and not from the comfort of Mediaite Headquarters). As such, it was unsurprising that Mayor Bloomberg got a fairly icy reception during a press conference on the city’s response. Obviously a little harried, the Mayor, at one point, sarcastically responded to a question about his regrets by admitting that he did, indeed, “regret everything in the world.”

Bloomberg was clearly feeling the pressure as he asked for patience and tried to shift some of the blame to people who used their cars after being told not to only to have them be stuck and others who tied up emergency lines when not needed. In a press conference yesterday, he reminded New Yorkers that the world wasn’t ending. Today, with anger rising and one of the pictures getting most attention online featuring his own cleanly plowed street, he appeared a little less confident. He did, however, again mention that the Armageddon wasn’t upon us.

“We cannot do everything all the time and we are doing the best we can. I think that this city has pulled together. I don’t think that we should sit around and think the end of the world is here. We cannot be every place at all times but, if you look around, the people behind me are the best in this country to lead this city and to provide the services we need. We won’t get to everybody every time. We will make mistakes. But we have to continue plugging ahead. Yelling about it and complaining doesn’t help.”

What’s a guy got to do to get some patience from the people? Deliver diapers?

Check out a section from the contentious press conference from NY1 below, including the “everything in the world” comment around the 3:55 mark.