Saudi Pundit: Women Drive Cars Because Getting Raped Is ‘No Big Deal to Them’
Video

Saudi Pundit: Women Drive Cars Because Getting Raped Is ‘No Big Deal to Them’ 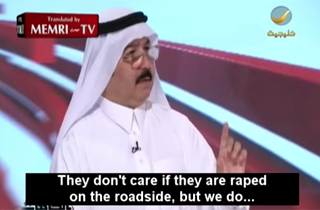 No, we did not miss a word when that headline was written: a Saudi Arabian historian recently claimed during a televised debate that women who drive cars run the risk of getting raped, and that for female drivers, getting raped is “no big deal for them beyond the damage to their morale.”

While discussing Saudi Arabia’s ban on women driving cars — legally punishable with a fine, but sometimes by whipping — historian Saleh al-Saadoon applauded the ban, saying that it actually protected Saudi women. According to a translation provided by MEMRI, al-Saadon pointed out that cars can break down and thus leave women vulnerable to rape, and all the women who drive in America, Europe and other Arab countries drive because “they don’t care if they are raped on the roadside, but we do.”

“Hold on,” the female host interrupted. “Who told you they don’t care about getting raped on the roadside?”

“It’s no big deal for them beyond the damage to their morale,” al-Saadoon replied. “In our case, however, the problem is of a social and religious nature.”

Disregarding the shocked look of the other guests — “They should listen to me and get used to what society thinks” — al-Saadoon presented several more arguments, including that Saudi women are treated “like queens” because they don’t have to drive themselves and, hey, he wasn’t being sexist: “The solution is to bring in female foreign chauffeurs to drive our wives.”

Watch logic collapse under the weight of a really bizarre interpretation of Islam below, via Memri: