Yesterday’s Democratic walkout at a House hearing on the Obama administration’s contraception mandate, which featured an all-male panel of witnesses, has become the latest rallying point in the culture war over women’s healthcare. On Friday morning’s Morning Joe, fill-in hosts Willie Geist and Mike Barnicle were not about to let that stand, and convened a vagina-free panel consisting of Sam Stein, Lawrence O’Donnell, Donny Deutsch, and Rep. Elijah Cummings (D-MD)  to discuss it, leading to this stunning screenshot: 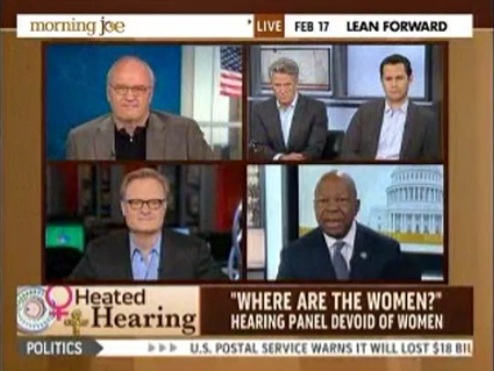 Barnicle teased the segment with a clip of Rep. Carolyn Maloney at that hearing, saying “Where are the women? When I look at this panel, I don’t see one single woman representing the tens of millions of women across the country who want and need current insurance coverage for basic preventive health care services including family planning. Where are the women?”

So, after introducing a segment about a hearing on contraceptives that Democrats walked out of because the Republicans rejected the lone female witness, and after excoriating that hearing for doing so, Barnicle casually announces that his all-male panel will get to it when they get to it.

When they finally did get back to the subject, Lawrence O’Donnell asked Rep. Cummings if Republicans are feeling the political winds they’re currently pissing into. Cummings’ answer might as well have been directed at the Morning Joe producers. “It pains me to say this, but I don’t think they have a clue,” he said,  “and that’s the sad part about it. When I sat there and i looked out at those men talking about women’s reproductive rights and their — and contraception, you know, I said to myself, you know, suppose this was — we were here talking about prostate cancer and the only people on the panel were women. Men would be alarmed.”