Say It Ain’t So! Bill O’Reilly Threatens To End His Show If Obama Raises Taxes 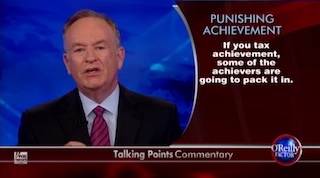 It’s already begun. The looming shadow of President Obama’s “Warren Buffett tax” has begun covering the ground, frightening the cute and cuddly Job Creators back inside their burrows (or their summer burrows in the Hamptons, or that little burrow off the coast of Italy that they bought on a whim but just don’t have any time to go to!) and meaning that we’ll all be stuck in cold, cold recession for at least a few more months. The first Job Creator threatening to go home and take his jobs with him? Bill O’Reilly, who warned on The Factor last night that, were Obama to raise taxes, his show might be no more.

O’Reilly made the claim during his Talking Points Commentary which he said was on “Punishing Achievement.”

“If you tax achievement, some of the achievers are going to pack it in. Again, let’s take me. My corporations employ scores of people. They depend on me to do what I do so they can make a nice salary. If Barack Obama begins taxing me more than 50%, which is very possible, I don’t know how much longer I’m going to do this. I like my job but there comes a point when taxation becomes oppressive. Is the country really entitled to half a person’s income?”

Will this be the first of many? Will the light of America’s TV shows begin going out, vanishing to darkness? Will our airwaves soon be filled by poor people, the only television hosts left that Obama isn’t ruining? Will the Desperate Housewives soon actually be desperate as entire plotlines revolve around making sure their family doesn’t starve?

That’s not an America I want to live in. We’re a nation that kept Entourage on the air for 50 whole years (I’m not going to do the math on that. It feels like that number’s accurate), we’re not about to start watching TV shows about Job Wanters.

So please, Obama. Balance the budget another way. You can take away our healthcare, but don’t you dare touch our O’Reilly.