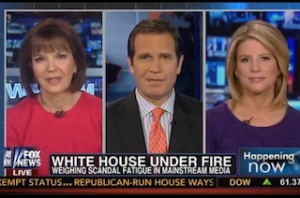 Judith Miller began by taking a swipe at the “mainstream media,” saying, “when issues get complicated and the press have to do a lot of filling in of facts that perhaps they haven’t bothered to report before, yes, things do get complicated and it makes you tired.” But she did commend the press for tackling the scandals at all, even it was only for a few minutes as the fourth or fifth story on an evening newscast. She credited the media attention with “finally” forcing the president to respond to the accusations personally.

On the other hand, Kirsten Powers said she believes Republicans are making “a lot of mistakes” by trying to overreach on the scandals. She said the GOP risks looking hypocritical for going after Obama in the AP investigation since they have previously been in favor of prosecuting whistle-blowers. “Even on Benghazi,” she added, “where I think there are a lot of serious questions, by bringing up Watergate, by trying to compare it to things that I don’t think are fair analogies, they are just–they are giving an excuse to the people who don’t want to cover it.”