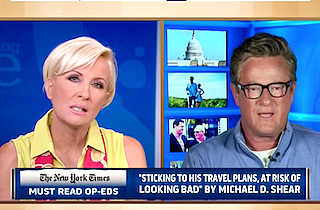 Scarborough contrasted Obama’s behavior with that of Ronald Reagan’s following the Soviet attack on Korean Air Flight 007 in 1983 — even as cohost Mika Brzezinski tried to tell him that Reagan had actually waited four days in between the incident and his speech condemning it, and had fought against canceling his vacation. Here, have a transcript:

BRZEZINSKI: At the same time there’s these parallels being made to Ronald Reagan and how he responded to the Korean airliner. It took him four days to go back and make the strong statements that he made, just for some perspective.

SCARBOROUGH: He immediately canceled his vacation.

BRZEZINSKI: No, he didn’t, actually.

SCARBOROUGH: Yes, he actually did.

BRZEZINSKI: No, he didn’t immediately cancel it.

Brzezinski, it turned out, was right. Reagan’s address came four days after the attack, in between which he had an aide make a statement about the incident before making a shorter one himself. At the time, Reagan had been on a twenty-five day vacation in California, and resisted returning to Washington, having an aide tell reporters that he had “every facility, every capacity, every capability” to deal with the crisis at his California ranch. The trip was eventually cut short.

Scarborough conceded the point on Twitter about fifteen minutes later:

And thanks to all the kind souls on Twitter who pointed out my boneheaded error as well. You are great ombudsmen! I was wrong. @morningmika