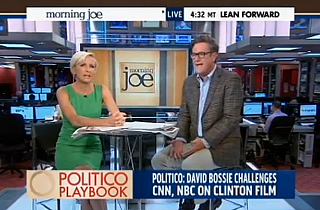 Mika Brzezinski had been suggesting that Priebus was “missing the elephant in the room” by calling out CNN and NBC while ignoring the fact that the GOP has “its own network” in the Fox News Channel.

This prompted Joe Scarborough to jump in: “Every time you bring up Fox, you gotta to bring up MSNBC,” he said.

“I don’t see MSNBC going after Democratic presidential candidates and trying to hire them or trying to push them into forefront,” Brzezinski asserted. “And everything you read is that Roger Ailes gets behind Republican candidates, he hires them, he puts them on the air. It is a mouthpiece for the Republican Party.”

“I’m sorry I can’t be quiet here,” Scarborough declared. “I can’t be quiet. What do you think MSNBC is at night?” he then asked. “It is exactly the same!”

His co-host disagreed, prompting him to respond: “Of course you don’t think so because you are a Democrat!”

Brzezinski insisted that, unlike Ailes’ past hirings of and support for Republican politicians, MSNBC chief Phil Griffin would “never” use the network as a platform to support his preferred candidates.

“I really need to be calling my agent,” Scarborough jokingly continued before playfully suggesting his career is now “over” for attacking his own employer.