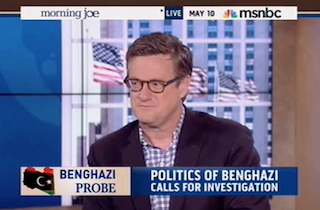 Morning Joe kicked off Friday’s show with a discussion about Benghazi that spanned from the RNC’s unaired attack ad to this morning’s report about the edits to the talking points. A few of the guests were skeptical about how lasting an effect the issue will have on Hillary Clinton — but Joe Scarborough hypothesized we’d all have been “harder on the administration” if the far right hadn’t “overplayed their hand.”

The segment opened with the attack, which used Clinton’s own 2008 “3 a.m. phone call” ad against her by meshing it with Benghazi footage and stating, “The call came.” Bloomberg View’s Al Hunt, didn’t think much of it though. “If that is the best they got,” he remarked, “I wouldn’t worry a whole lot if I was Hillary.”

Later in the discussion, Cokie Roberts brought up the report about the talking points — ABC News reported they were revised 12 times, which included scrubbing a terror reference at the request of the State Department spokesperson — and Scarborough agreed that things don’t look good. But, he asked, as the panel agreed that the White House and State Department bungled this issue from the start, “how much mileage can the Republicans get from this?”

At the end of the day, Scarborough later jumped in, “This has the DNA of a Clinton scandal more than it does an Obama scandal, does it not?”

“Scandal is a strong word,” Roberts replied, to which Scarborough asked, “What is a couple notches below a scandal? Kerfuffle? Four people are dead.”

“The first ambassador killed since 1979 — it is serious,” he continued. “You talk about overplaying your hand. If a lot of people on the far right hadn’t overplayed their hand on Benghazi and were screaming — before they knew what they were screaming about — I think we would all be much harder on the administration right now.”