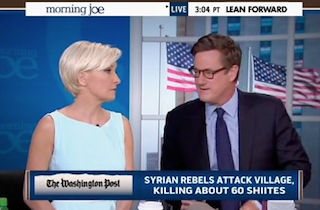 At the top of Wednesday’s show, the Morning Joe crew addressed the NSA story and leaker Edward Snowden, who’s now a central figure amid it all. There were opinions all around — with Joe Scarborough deeming Snowden a “weasel” while Mika Brzezinski chose to highlight the “misleading” coverage of the story and reporter Glenn Greenwald‘s closeness to it.

“Look at that guy, that guy is a weasel,” Scarborough remarked, as they segued into the story. “Can we not put his face up on the screen? He looks like a weasel.”

To which Richard Haass responded that we should simply stray away from labeling him a whistleblower — which Brzezinski found to be an “intellectual, true analysis of the definition of what he is.”

“He’s not a whistleblower, okay?” she added. “And it’s actually been very misleading the way this story’s been covered, even by the reporter himself. … Who’s super, super close to the story, okay?”

(Earlier in the week , Brzezinski had a bit of a testy exchange with said reporter, who accused her of using “White House talking points.”)

As Scarborough replied that the government has been misleading us for so long, Brzezinski reiterated, “But let’s also make sure we analyze everybody involved, including the press, which isn’t perfect either.”

With that, they eventually got to the recap of the story, including Snowden’s fate and Director of National Intelligence James Clapper previously denying any such surveillance existed. “He was put in an impossible situation,” Haass weighed in. “He was in a public setting and had to discuss a classified program.”

The discussion continued on, with Scarborough noting that while the NSA story is dominating the news, most Americans simply don’t care. And often, Brzezinski added, they feel the government should just “do it.”