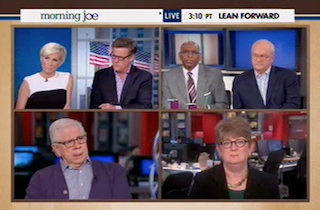 Morning Joe opened the show on Tuesday with a roundtable discussion about the Department of Justice seizing the Associated Press’ phone records — and was joined by Kathleen Carroll, the AP’s executive editor. Arguing that the move went beyond just incompetence, Joe Scarborough charged it was “sinister.”

It’s “clearly distressing,” Carroll said, to know someone was looking at their phone records — not just regarding reporting for national security stories, but also phone calls to local officials “in the normal course of business.” Scarborough deemed it “chilling,” not only for the reporters but for their sources, which may include whistleblowers. “None of us have ever seen anything like this,” Carroll added.

“Outrageous, it is totally inexcusable,” Carl Bernstein jumped in. “The object of it is to intimidate people who talk to reporters. This was an accident waiting to become a nuclear event — and now it’s happened. There’s no excuse for it whatsoever. There’s no reason for this investigation, especially on this scale. … This is intimidation, it’s wrong, the president of the United States should’ve long ago put a stop to this in his presidency.”

Such actions are also designed to “intimidate sources,” Scarborough noted, which Bernstein deemed “inexcusable.” There “is no reason that a presidency that is interested in a truly free press and its functioning should permit this to happen,” Bernstein asserted.

Later in the segment, Scarborough recalled their earlier discussion in which they noted that the Obama administration isn’t criminal like the Nixon administration was. “I said, well, at least they’re incompetent, we all agreed on that, in these matters,” he elaborated. “But you know what, this goes beyond incompetence. This is sinister.”