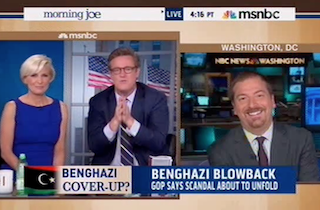 Joe Scarborough and Chuck Todd commiserated a bit on Wednesday’s Morning Joe, as they both questioned why conservatives are going after the Obama administration for Benghazi so fervently. While the situation merits investigation, both MSNBCers agreed that it’s no political “holy grail” — and won’t ensure Republican victory in 2014.

Recalling a conversation with a leading Republican, Scarborough initiated the conversation as he discussed how said Republican felt the Benghazi will turn the American people against President Obama. “Are you kidding me?” was Scarborough’s reaction. “I want the investigation,” he agreed, but “I don’t understand why conservatives believe that this is somehow the holy grail politically.”

Yes, if there’s wrong-doing, “I want it sniffed out,” Scarborough said. But this “is not the Republican pathway to victory in 2014,” he added as he questioned why conservatives feel this will be Obama’s Watergate. Todd agreed (accurately realizing this conversation would get them both a fair share of Twitter hate). There’s always those in the House, he argued, that feel that if they had subpoena power “they can drag any president down.”

There’s a sense that “there’s got to be something,” Todd continued.

“They’ve got to be able to get this guy on scandal rather than the fact they won on the issues in 2010 when they were able to win on health care. […] For this conspiracy theory that some people believe is out there — that the White House was trying to downplay a terrorist attack because of the election — then they did a really poor job of it. Because within three or four days, it was pretty clear to the entire world this was a terrorist attack from a group that had some sort of extremist Al Qaeda ties.”

Rounding out the segment, Scarborough made sure to note, in disclaimer fashion, that he wasn’t dismissing the issue entirely. The State Department’s been “hammered” and allegations should be taken seriously, he said — but let’s not jump to conclusions about whether this scandal will outdo the likes of Watergate and Iran-contra.