Scarborough Clashes With New Republic Editors Over Demise Of NRA: ‘They’re Not Going Down’
video

Scarborough Clashes With New Republic Editors Over Demise Of NRA: ‘They’re Not Going Down’ 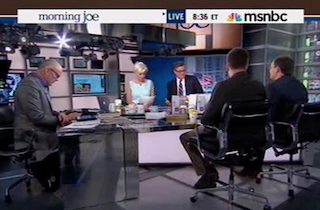 The New Republic’s Alec MacGillis and Franklin Foer paid a visit to Morning Joe on Tuesday to discuss the former’s new cover story about how the NRA is “going down.” Joe Scarborough — for all his gun control activism and NRA criticism — wasn’t convinced. Things have changed and the group faces more obstacles, he agreed, but the NRA isn’t going anywhere.

“You just did this so liberals could pick up this magazine and hug it,” Scarborough quipped. “They’re not going down.”

The reason for the gap between perception and reality is that, for many years, the NRA has had no real opposition. This has given the debate a strange quality: For gun-control advocates, the recent challenge has been less about persuading politicians on policy grounds and more about trying to convince them that the conventional wisdom about gun politics is wrong.

And then came Newtown.

MacGillis argued that we should be looking at how close the background checks vote was, as well as the backlash that followed the measure’s defeat. “The backlash is the deal real,” he emphasized. Newtown “has changed everything,” Scarborough agreed, “but come on.” Talk of demise? Is this “not just editor oversell”?

The NRA’s power, Foer argued, is not rooted in the large sums of money they’ve spent or that they have better lobbyists. It’s based on “a perception that you mess with the NRA, you’re going to pay a terrible political price. To be sure, there is a graveyard filled with the political careers of many, many politicians.”

There, Scarborough jumped in to counter the “mythology” of said graveyards — pointing, as he’s wont to do, to his own previous political career. He tackled the gun issue, but it was just one of many, he reminded. There was foreign policy and economics, too.

“Their biggest problem right now,” MacGillis explained later in the segment, “is that they have no vulnerable Republicans who voted against this bill. Ayotte and all these other senators not up for a couple of years, so the big test case is going to be the Democrats who voted against the bill.”

“After the Republican filing dates are passed, they are going to have another vote on Capitol Hill and these people are going to find an excuse to vote for it,” Scarborough asserted.