Scarborough Commends Obama For Crossing ‘Extreme’ Base With GOP Outreach: ‘Doing Them A Great Favor’ 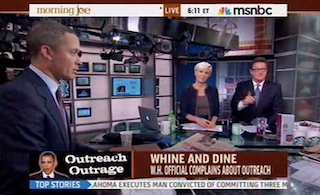 Morning Joe took a look at President Obama‘s Republican outreach (in light of the White House pushing back on the report that it’s a political ploy), as well as the recent drop in his favorability rating, during Wednesday’s show. While the panel largely commended the president for heading over to Capitol Hill, Joe Scarborough noted that he wouldn’t get good reception from his for taking on issues like entitlement reform. Right now, Mike Barnicle agreed, Obama simply “can’t win.”

“I think the president should be commended for doing it,” Scarborough asserted, referring to Obama’s reaching out to Capitol Hill. “Right now, the president, he says what he needs to say for his base — the harsh things about the Ryan budget. But he’s still talking to him while everybody on the base, Mike, is, you know, sniping — and not only at the president, but saying horrible things about Paul Ryan’s budget.”

Obama “is now in a position where he can’t win,” Barnicle chimed in. If he doesn’t go to dinner with GOP senators or up to the Hill, he’ll be characterized as aloof or arrogant. If he does, the reaction is, “He doesn’t really mean it.”

Those he’s reached out to have appreciated it, Kelly O’Donnell replied — and it’s not just about socializing. “It’s about having a few minutes where you have the attention of the most powerful person in the world and you’re able to, as a lawmaker yourself, get some of your thoughts across.”

But then we go to Obama’s favorability rating, and the numbers are worse now than they were in January. “He has to be concerned about that right now,” Scarborough asserted… because “you never want…if you’re president of the United States, to be within 40 points of Congress’ approval rating.” (Touché.)

The base — not keen on cuts to areas like entitlements — may not be loving Obama’s approach right now, Scarborough added, “the president is actually doing them a great favor.”