Scarborough Compares Obama’s Response To Syria To Bush After 9/11: He ‘Can’t Bluff Anymore’ 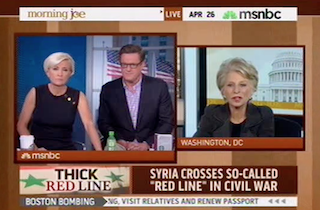 Yesterday the White House said, with “varying degrees of confidence, that the Syrian government has used chemical weapons in its ongoing civil war. While officials said they need more definitive proof, many were quick to point out that President Obama had declared chemical weapons to the be “red line” for American involvement. Morning Joe was no exception.

The United States need to reach out to allies in the region and arm the people we trust, Jane Harman asserted during the roundtable discussion. Because we can’t tackle the situation by air and are unlikely to go in on the ground, she added, it would be in our interest to initiate “back-channel conversations with the Russians.”

“Yesterday, a library was dedicated in Texas for a president who responded to the challenges of…9/11,” Joe Scarborough chimed in.

“He responded in some ways that, obviously, history has frowned upon. Ten years later, you’ve got Barack Obama who has waited much longer to get engaged in Syria than a president would in regular times — but he is also framed by ten years of war and a war-weary public. That said, if chemical weapons have been used and if the red line has been crossed — and this is the president who said before Assad must go — the president can’t bluff any more. He said Assad must go, and then did nothing. He said if there are chemical weapons, we have to do something. He can’t bluff a second or third time.”

Jon Meacham agreed that there’s little “wiggle room” once such a red line has been laid down. “If a president chooses to make an existential question out of a development — like the one we have seen in Syria or thought we were seeing in Iraq — lives are at stake,” he asserted. “And vital security interest of the United States. So it will depend on what the president does now.”