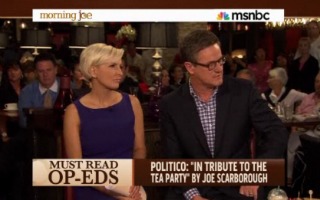 On Monday’s Morning Joe, host Mika Brzezinski read from co-host Joe Scarborough latest op-ed piece from Politico, in which he sings praises “In Tribute to the Tea Party.”

In the piece, Scarborough argues the following:

I’m not saying the Tea Party should be immune to criticism. Like most large political movements, this one has also had its share of excesses.

Sometimes the rhetoric gets too heated. At times, its members have chosen to obstruct instead of fighting for a debt deal that would solve our fiscal crisis. And the same fervor that drove Pelosi from her speaker’s chair has also managed to keep Reid in his because of some deeply flawed Tea Party senate nominees.

But, all in all, most Republicans I know prefer having the largest GOP majority since 1946 instead of Pelosi. We also liked having 700 new Republican state legislators elected in 2010, a national debate focused on less spending and a Democratic president who is now fighting for his political life.

No one knows what happens next. But, we can at least start telling the truth about what happened over the last three years. Whether opinion leaders like it or not, the Tea Party helped engineer a Republican landslide, reframed the national debate and put the president so far back on his heels that even Mitt Romney has a chance to be president.

MSNBC contributor and former RNC chairman Michael Steele then explained how he’d sat down with those who were immensely “ticked off” over the strain of big government Republicanism at play within the GOP. Big changes came from that, he added, including the appointment of various minority Republicans at different levels of government, essentially helping to “expand the breadth and the reach of the party.”

Scarborough then turned to Brzezinski and admitted that the Tea Party has led to some noticeable missteps — Christine O’Donnell’s name was mentioned — but that, overall, they’ve done a lot of good work and made positive changes that have been largely ignored or dismissed by the left and the media because of a “cultural blind spot.” If the Occupy movement had done 1/10th of what the Tea Party has accomplished, he added, “my God, there would be statues in Manhattan.”