Scarborough Defends Ailes: ‘Was Dripping With Contempt For Beck’s Craziness’ 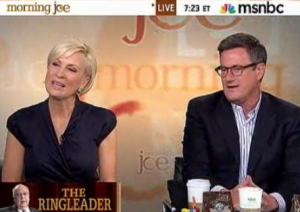 The explosive New York magazine profile of Roger Ailes that we covered extensively, was the subject for discussion on Morning Joe with the article’s author, Gabriel Sherman. Joe Scarborough was most intrigued by the relationship and discussions between Ailes and Glenn Beck and was pleased to conclude “Ailes was dripping with contempt for Beck’s craziness long before we heard about it.”

Sherman highlighted from his piece that Ailes was aware of Beck’s growing notoriety and how the Beck brand was overtaking Fox. Therefore, “Roger decided he can’t have Glenn Beck being the public face of Fox News” since he didn’t want Fox News “to be associated with that type of incendiary rhetoric.” Scarborough agreed, saying Beck’s rantings “made a lot of people uncomfortable including Roger Ailes” and kept repeating the fact that Beck owes all of his success to Ailes. Scarborough was convinced that thanks to Ailes, Fox News, is bigger than any one person:

“Roger Ailes – other than [Bill] O’Reilly – can take everybody out of Fox News from six in the morning to midnight and it would still be Fox News and they would still get extraordinary ratings. This is the story of a guy who did not understand. [Beck] got plugged into the machine and he started believing the headlines.”

Although Scarborough’s world seemed to humorously shatter a bit after learning what Ailes has now helped Beck launch. When Sherman revealed just how much money Beck makes “on the side” from his company Mercury Radio Arts ($40 million last year alone), Scarborough responded:

“I’m in the wrong business. . . . So I could put like Vicks in my eyes, set my hair on fire, say the world is coming to an end every Tuesday and you’re saying $40 million?”

Mika Brzezinski had her own conclusion, saying “the things you can do if you don’t care about morals.”