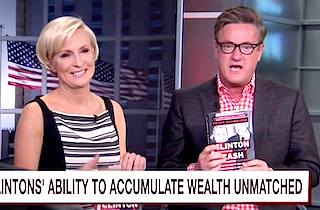 Brzezinski had been quizzing Schweizer for evidence to his claims that the Clintons exchanged favorable treatment from the State Department for multimillion dollar donations to the Clinton Foundation and exorbitant speaking fees for Bill Clinton. Schweizer has now said in several television appearances that he has no “smoking gun,” but believes the pattern of behavior is evidential, as in insider trading cases.

At that point Scarborough had had enough.

McDonnell was indicted last year for essentially using the state of Virginia as a credit card. Menendez has been charged by the Justice Department for allegedly exchanging favorable legislation for gifts from a Floridian eye doctor.

Brzezinski pointed out the Justice Department led the way in those cases, causing Scarborough to remind god and everybody that when Schweizer wrote a book on congressional insider trading it was praised up and down, but now that he’s written one about the Clinton’s he’s being smeared.

“It’s the Clintons, and suddenly, ‘Oh my god, let’s bow down before Bill and Hillary, because if we ask the same questions of them that we’ve asked every other politician, then we’ve crossed a line,'” he said. “I don’t really understand the shock and awe here.”

Lower the volume on your laptop, trust me, and watch the clip below, via MSNBC: