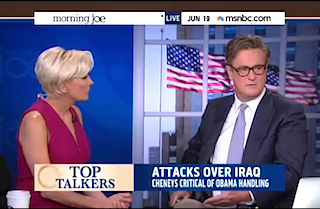 Should the members of the Bush administration most responsible to invading Iraq be “allowed” to criticize President Barack Obama about his handling of the current crisis in that country? That’s a question that has been getting a good deal of play this week as people like Paul Bremer, Paul Wolfowitz and Dick Cheney make the cable news rounds to offer their “expert” opinions on what should be done in Iraq today.

Without naming any names, MSNBC Joe Scarborough tore into his media colleagues for being “afraid” to hear from those men and others on the issue and instead trying to shut down debate from those who got it wrong on Iraq the first time.

“I made no secret of the fact that I think Paul Bremer is more responsible than just about anybody for the chaos that has gone in Iraq because of the de-Baathification of it,” Scarborough said Thursday morning. “Do we have Paul Bremer on to talk about it? Are we afraid to let him talk? No. We allow people to talk.”

“We have a free marketplace of ideas and even people with whom we disagree, we allow them to talk,” he continued. “That’s why people watch this show. If they wanted to watch people just saying what they — what everybody else in a little circle believe, they could watch certain shows on prime time cable.” Scarborough defended that way he “challenged” people like Bremer and Bill Kristol on the issues.

“I don’t know why some people are so intellectually weak that they’re afraid to actually listen,” Scarborough added.

Mika Brzezinski responded to Scarborough by saying there’s a difference between someone like Bremer and someone like Cheney, who has set up a new political group specifically designed to oppose Obama’s foreign policy. “You talked about the original sin being invading Iraq, that we all agree with that? He doesn’t!” she said.

Among the cable news hosts who have criticized the booking of people like Dick Cheney to discuss Iraq policy is Scarborough’s MSNBC colleague Rachel Maddow, who last night labeled the former vice president’s media appearances “laugh-out-loud” self-parody. Similarly, CNN’s Don Lemon said last night, “The fact that Dick Cheney has the gall to offer anyone advice on Iraq is laughable, except it’s not funny.”