Scarborough Goes After Conservative ‘Howlers’: ‘Do You Ever Want To Be In The White House Again’?
video

Scarborough Goes After Conservative ‘Howlers’: ‘Do You Ever Want To Be In The White House Again’? 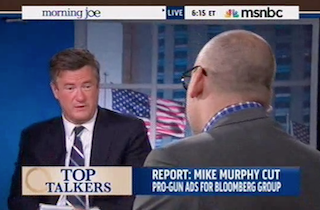 During Tuesday’s Morning Joe discussion about GOP strategist Mike Murphy reportedly cutting ads for Michael Bloomberg‘s gun group, Joe Scarborough turned to his favorite topic of discussion: Those yelling, screaming conservatives who don’t like to win. It seems many people don’t understand the concept of elections, he quipped. (It’s simple: Your side has to get more votes.)

Murphy “will be hounded for the rest of his political life,” Scarborough predicted, “by extreme members of the NRA.” But it’s people like him who will help the Republican Party “get the middle of America back again.”

Willie Geist agreed, noting that Murphy hasn’t been one to shy away from what he believes in — drawing a parallel to Bob Dole‘s recent comments about the state of the GOP. Here, Scarborough went off, recalling the days of the battle of background checks for guns.

Remarking about those who called Ronald Reagan a RINO, he mocked the idea that the man who “created the modern Republican Party” is not conservative enough. The “howlers” — the 12 who go out and vote — are a minority who don’t affect presidential elections, he argued.

“The party has to decide do you ever want to be in the White House again or not. It’s very simple,” Scarborough explained. “I like winning, I’m different. I am a RINO in that respect. My dear howling friends, I like to win. In fact, I do win. That’s just what I do. … I don’t know if you knew this or not, the idea in elections is to get more votes than the other side.”