Scarborough Goes Off on Emanuel for Obamacare Defense: ‘That’s Garbage!’ 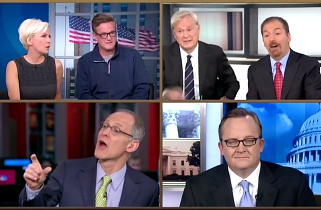 On Morning Joe Monday morning, Ezekiel Emanuel reprised his defense of Obamacare from Fox News Sunday and found renewed resistance in host Joe Scarborough, who declared it “garbage” and told Emanuel was he “better than this.”

Emanuel, an architect of the Affordable Care Act, pushed back against the accusation that President Barack Obama misled the public when he said that Obamacare would allow people to keep their insurance policies if they wanted.

“The law did not kick anyone off their plan, the law did not say you have to cancel those plans,” Emanuel said. “The law said that if on March 23rd, 2010 you’re in place, as long as you keep that plan in place and don’t change it radically, you can stay on it forever. You can drive your Pinto without airbags or seat belts forever. On the other hand, if the insurance company changes the plan, if you go off that plan to another plan, you have to get a new plan. Who’s making that change? The insurance companies.”

“Oh, come on, that’s garbage!” Scarborough objected. “This is so beneath you.”

“When [Obama] said it, immediately I’m thinking how is that going to work?” MSNBC chief political analyst Chuck Todd said. “He may have been talking about the individual market, but he never said that, number one. He may be talking about what [Emanuel] is saying, but he never said that, number two. There was no fast lawyer talk fine print at the end of the ad, you know, ‘Some of these things may not be true, da-da, da-da. None of that was there.”

“You don’t give fine print in a political speech,” Emanuel said. “Be serious.”

“He said it twenty-six times and knew it wasn’t true every time he said it,” Scarborough replied.