Scarborough Goes Off On Republicans Too ‘Angry’ To ‘Win Elections’: ‘You’re Not A Conservative, You’re A Nihilist’
VIDEO

Scarborough Goes Off On Republicans Too ‘Angry’ To ‘Win Elections’: ‘You’re Not A Conservative, You’re A Nihilist’ 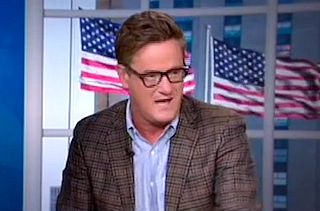 On Wednesday morning, Morning Joe co-host Joe Scarborough excoriated Republicans who are advocating shutting down the government if Obamacare isn’t defunded, arguing that the shutdown threat promoted by a group of senators was about “increasing their mailing lists” at the cost of GOP’s electoral viability, and that anybody who supports them was “too stupid to be a member of our party.”

“When do you realize that your stupidity is getting in the way of conservatives winning national elections?” Scarborough demanded. “Do you want to keep losing? You’ve lost a popular vote five out of six times in presidential races. Do you want to lose the next five or six? Do you really want Hillary Clinton to be president for the next eight years? Do you really want her to pick four, five, six, seven, eight Supreme Court justices along with Barack Obama over the next, what, eleven years?”

“Are you really that stupid?” Scarborough continued. “Are you really that dumb? Are you really in that much need of being angry and resentful, that you just stop caring about winning elections? If so, you’re not a Republican. You’re not a conservative. You’re a nihilist. And you’ve got no place in our party. Take your stupid act somewhere else, because I, for one, am damn tired of losing, and having stupid people like you defining my party.”