Scarborough Has a Choice to Make: Donald Trump, or Respectability
Opinion

Scarborough Has a Choice to Make: Donald Trump, or Respectability 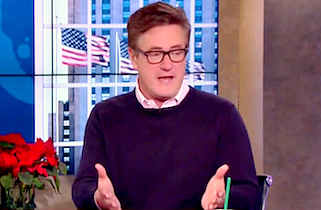 In August of 2015, CNN New Day host Chris Cuomo made an interesting comment when discussing a contentious interview he had the previous night with Donald Trump. “This morning he’s going on with friends and making sure that he can clean up and reclassify anything that he doesn’t like about how the interview went yesterday,” he said. “That’s how he knows how to work the game.” Later on Twitter, he made a similar remark, saying Trump preferred “friends who give [him] a pass all the time.”

While the “friends” remarks might sound like a knock on Fox & Friends, Trump was on a different show that morning… MSNBC’s Morning Joe.

Flashforward to this week, and Cuomo’s comments seem all the more relevant after host Joe Scarborough was called out for being too cozy with the Republican presidential candidate. Here’s the short version: Trump finished out an interview with Morning Joe by thanking him and co-host Mika Brzezinski for being supporters. At the same time, Trump alluded to seeing them the previous night. Later in the day, CNN’s Dylan Byers reported that Scarborough and Brzezinski visited with Trump in his hotel room during the New Hampshire primary.

Scarborough went off on Byers and CNN for the scoop, calling them “liars,” and “trolls” and mocking their ratings. But when MSNBC released a statement denouncing the CNN report, they confirmed the basics of Byers’ reporting; the duo visited Trump’s hotel room, and that included a conversation with Donald himself. Instead they attacked Byers for “implying that [they] watched election returns with Donald Trump,” something Byers never actually implied at all.

The same day, Mediaite reported that Scarborough had once bragged about him and Brzezinski visiting Donald Trump in his office after the second debate, during which he gave Trump debate tips. So in essence, Scarborough was attacking Byers for announcing a conflict of interest that he himself had announced over a month earlier, behind closed doors. “I hope we don’t have reporters here,” Scarborough said, before launching into the story, a clear admission that he knew the visit was inappropriate and would look bad in the light of day.

Scarborough’s brother is also a major Trump endorser in Florida, even opening for him in Pensacola. But I’m sure that’s unrelated.

The fact is that Scarborough has long attempted to occupy two worlds at the same time. In one world, he is the Honorable Joe Scarborough, the former Florida politician who has hinted at Senate and presidential ambitions. He can hobnob with the politically powerful, get buddy-buddy with Republican insiders at parties, and always knows the juiciest DC gossip.

In the other world he is Joe Scarborough, News Host. He asks tough questions of Republicans and Democrats alike, gives in-depth analysis, and his wonky tell-it-how-it-is morning show is on every TV in the Senate gym. Sure Scarborough is a conservative, but his analysis is guided more by principles than politics. On Morning Joe, there is no favoritism or personal feuds, but just the facts, ma’am.

The reason he has managed his balance so well up until this point is that Scarborough’s politicking and bias was, by and large, tolerable. The Republican and Democratic establishment could listen to him trash Hillary Clinton and Ted Cruz daily and not bat an eye, because in their mind those were the straight facts. Even when they disagreed, his opinions were never far afield of the political mainstream and there was never any sense they were driven by animus.

But befriending and boosting Donald Trump, the most hated man in politics, slanderer of journalists, whose policies range from the dangerously extreme to the laughably unrealistic? That’s truly unforgivable. That’s a crime against both Scarborough, Establishment Politician and Scarborough, Straight Newsman, and that‘s why he reacted so negatively when it came to light.

In short, Scarborough has kept his high profile by maintaining an air of respectability. He presents respectable facts and respectable opinions and invites respectable guests from respectable publications. He can be a respectable politician or a respectable newsman– and even try to be both at the same time– but not while this bizarre flirtation with Trump exists.

Of course, when discussing how Scarborough has toed the line between being an MSNBC host and a Florida politician, one has to discuss his blatant and obvious anti-Marco Rubio advocacy. Scarborough threw a similar hissy fit a week ago when The New York Times reported that his constant bashing of Rubio stemmed not from calculated political assessments, but from an intense personal and political jealousy.

National Review reported much the same last year, reporting that Scarborough was loudly trashing Rubio at every opportunity during a Republican gathering, and that he had spread anonymous, unsubstantiated rumors about him on air. Politico’s Marc Caputo got even more specific about the false rumors Scarborough was selling his viewers:

Also, a lobbyist and good friend of Gaetz spread false rumors in ’10 of Rubio forcing a lobbyist to get an abortion. 1/2

1 DC reporter frequently on Morning Joe called me about rumor. Days later, Scarborough was talking about a “shoe to drop” in FL sen race 2/2

Scarborough responded by calling The Times story “lies” and demanding a retraction, accusing Caputo of “false speculation,” and accusing National Review of being secret Rubio supporters. A.k.a., he acted like every Trump supporter ever.

Scarborough’s protest-too-much moment is undermined by the fact that he has admitted in the past to receiving off-the-record communications from the Jeb Bush campaign pushing unsubstantiated rumors. Scarborough swears he never acted on them, but that doesn’t explain why Bush supporters thought Scarborough was the right person to leak anti-Rubio oppo to to begin with, and why he was spreading other unsubstantiated rumors.

There’s a reason CNN, Politico, National Review, and The New York Times are all questioning Scarborough’s integrity, and it isn’t jealousy. They’ve noticed what nearly every viewer has noticed for months; that Scarborough’s playing favorites in the 2016 election and barely hiding it. That isn’t necessarily a deal-breaker: he was hired for his opinions and we’re talking about a network that employs Al Sharpton. But if Scarborough really is nothing more than a politician settling scores and latching onto Trump’s coattails, he can expect more and more TVs in the Senate gym to slowly change channels.