Scarborough: If Colbert Goes Left at CBS, Fallon Will Be ‘Luckiest Guy in NYC’
video

Scarborough: If Colbert Goes Left at CBS, Fallon Will Be ‘Luckiest Guy in NYC’ 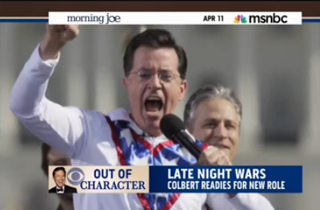 The talk turned to Stephen Colbert’s ascendancy to the Late Show on Morning Joe, and given the political slant of the show — both Morning Joe and The Colbert Report — Mika Brzezinski raised the question Rush Limbaugh asked yesterday: is CBS “declaring war” on the heartland by picking a man who built his career on ridiculing conservatives?

Both Joe Scarborough and Peter Lattman from the New York Times both agreed, contrary to Rush, that Colbert wouldn’t do that — especially because it would just be a terrible business move and inconsistent with Les Moonves‘s visions for the top network. For all his liberal satire, Scarborough pointed out, Colbert’s also a religious, practicing Christian and a family man — things that the heartland loves.

Furthermore, liberal comedians already dominate the market: “Most comedians on the national stage are liberals. That said, Johnny Carson won and dominated. And Jay Leno won and dominated. I think Jay is a progressive guy as well…But people who know TV know you win broadcast networks and certainly [CBS president] Les Moonves knows this you win when you win the Central Time Zone. Not when you win New York and LA. If Stephen Colbert decides to go far left — and he won’t on CBS — then Jimmy Fallon will be the luckiest guy in New York City, because NBC is going to get massive ratings.”