Scarborough: If NSA Surveillance is Unconstitutional, Does Snowden ‘Become a Whistleblower?’
VIDEO

Scarborough: If NSA Surveillance is Unconstitutional, Does Snowden ‘Become a Whistleblower?’ 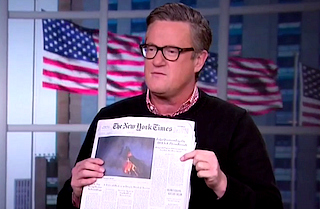 On Morning Joe Tuesday morning, host Joe Scarborough wondered if yesterday’s ruling by Federal Judge Richard Leon that the National Security Agency’s phone record collection was unconstitutional vindicated Edward Snowden’s leaking of the NSA materials, an act for which he remains wanted by the U.S. government.

“If what the NSA did last year, what the government’s been doing for some time, violates the most sacred tenets of the Constitution, and as a judge said, James Madison would be deeply offended by what the federal government has done to pry into other people’s lives, does Edward Snowden then become a whistleblower?” Scarborough asked. “Because I don’t know what the definition of whistleblower is. But let’s say this is held up in the United States Supreme Court. If somebody exposes something that would be deeply offensive to James Madison and the framers of Constitution, I think Edward Snowden has a point.”

RELATED: Mediaite Morning Reading List: Inside the Ruling Against the NSA

“[Snowden] said from the very beginning that this was what he was trying to do,” said New York Magazine’s John Heilemann. “He said he wanted to expose the program so it could be challenged in an open court, which it had never been able to be done before, because of the the nature of the program. It’s now been challenged in open court…Edward Snowden, at least for today, stands pretty fairly vindicated in terms of what he did, what he said he wanted to do.”