Scarborough: If We Attack ‘Culture’ of Christie, ‘We Have to Go After Culture of Obama’
video

Scarborough: If We Attack ‘Culture’ of Christie, ‘We Have to Go After Culture of Obama’ 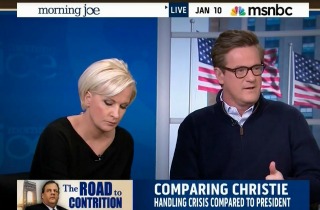 The hosts and guests of MSNBC’s Morning Joe on Friday offered their thoughts on New Jersey Gov. Chris Christie’s marathon press conference regarding the apparently vindictive lane closures on the George Washington Bridge which emails have revealed were aimed at causing headaches for the Democratic mayor of Fort Lee. Host Joe Scarborough said it was hypocritical to attack Christie for fostering a “culture” that permitted this behavior from his subordinates and not attack President Barack Obama for the same thing.

“Is this as bad as the IRS scandal that Barack Obama basically just sort of brushed off?” Scarborough asked Donny Deutsch. “I think if we are going to be critical of Chris Christie, we have to be critical of a culture in Washington D.C. where Barack Obama has allowed one scandal after another to break and then say, oh, I didn’t know anything about it.”

Mika Brzezinski said that the New York City reporters who went after Christie on Thursday did not “coddle” him in the way the Washington D.C. press does for Obama. She added that Obama never took personal responsibility for the IRS scandal in the way Christie did for the George Washington Bridge controversy.

Brzezinski also revealed that she had a 15 minute conversation with Christie minutes after he concluded his press conference on Thursday. She disclosed that Christie told her that the tone he took in dismissing this scandal early on was “totally stupid.”