Scarborough: ISIS Is Europe and Middle East’s Problem, Not Ours 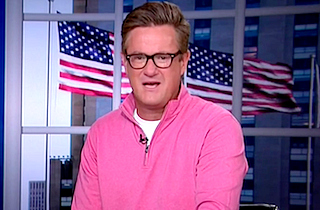 Morning Joe host Joe Scarborough denounced Europe and other Middle Eastern nations for not joining the United States in a more forceful response against ISIS and Russia in the deteriorating situations in northern Iraq and eastern Ukraine, respectively arguing that President Barack Obama was correct to wait for the international community to step up rather than launching unilateral strikes that then allows others to criticize the U.S.

“I support the president trying to get Arab nations trying to fight with us side by side, trying to get European nations,” he said. “I’m sick and tired of Europeans sitting back and doing nothing, turning the other cheek as Vladimir Putin kicks them in the face time and time again because of money. In this case, guess what: Iraq? It’s not our problem. This ain’t 2003, it’s 2014. Europe, this is your problem too. It’s the Middle East’s problem, too. More Muslims are going to be killed by ISIS than westerners.”

“So if you guys are sitting back waiting for us to carry your water again so you can bitch and moan because you don’t like the way we carry your water when we try to keep you safe, you have another thing coming. Just like the president talked about doing it in Libya, where he waited until the Arab League came, I think we need to let the world come to us and ask us to carry their water again, like we’ve been doing for about 60 years now.”