Scarborough Laments ‘Nobody Listened To Me’: Defending Assault Weapons Makes You Look ‘Like A Jackass’
video

Scarborough Laments ‘Nobody Listened To Me’: Defending Assault Weapons Makes You Look ‘Like A Jackass’ 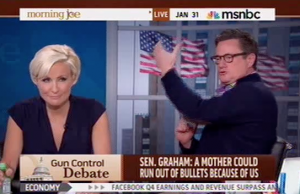 Upon looking at clips of Sen. Mitch McConnell — who said a mother may run out of bullets when defending herself and her children — and gun rights advocate Gail Trotter, Mika Brzezinski and Joe Scarborough appeared exasperated. “An assault weapon in the hands of a young woman defending her babies in her home becomes a defense weapon,” Trotter said during the hearing.

Pointing to LaPierre’s opposition to background checks, with the reasoning that criminals wouldn’t abide by them, Scarborough asked, “Why do we have any laws on the books? There are terrorists that are going to end up getting into the United States…why do we even try to stop al Qaeda? Right? They say they’re going to attack us again — so why don’t we let down all of our defenses and just give up?”

LaPierre, he later added, is part of that “survivalist” wing of the GOP. The wing that will cause more Republicans to lose. “Nobody listened to me,” he said. “They can decide: They want to start winning elections again or not?”