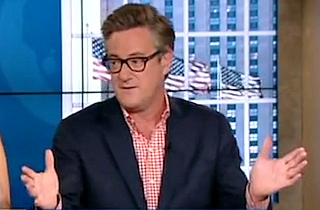 Morning Joe host Joe Scarborough mocked Ted Cruz’s “pretend filibuster,” which began Tuesday night and continued into Wednesday morning, arguing that it would yield no legislative results, and wasn’t even impressive as an example of political opportunism.

“You have to add to that brew that there’s a political opportunism here,” Huffington Post’s Sam Stein said. “He’s going to die on this hill, and then he’ll turn around and tell all of the conservatives that he was alone. That benefits him politically, even though it’s terribly narcissistic in some respects—”

“All politicians are narcissistic, but this is just phony, this isn’t even inspiring narcissism,” Scarborough said. “Churchill was a narcissist. But this is just pretend. He can be doing this in his closet and it would have the same exact effect on America.”

“We can say that a million times over,” Stein said. “But for him and for the people who follow him, he still gets to say, ‘I died on that hill for the purposes of defeating ObamaCare and I was alone.'”