Scarborough: Moderate GOP Must Stop Being ‘Afraid of Their Own Shadows’
VIDEO

Scarborough: Moderate GOP Must Stop Being ‘Afraid of Their Own Shadows’ 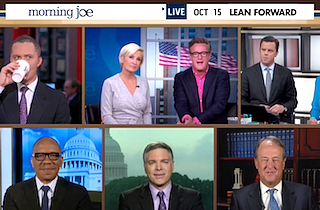 An unusually large amount of Republican voices (three!) on Morning Joe Tuesday morning coalesced around the call for moderate GOP lawmakers to stop being intimidated by the threat of hard-right primary challengers and stand up to a tea party caucus that is pushing the party in ever more contentious directions.

“Republicans have to stop being afraid of the notion of being primaried,” former George W Bush communucations director Nicolle Wallace said. “Republicans have to say bring it on, primary me. Because here’s what the tea party brought you. The sequester is something they’re proud to have brought you because it brought down spending, but not the right kind of spending…They brought you a government shut down, where people who don’t have a voice, people who actual depend on federal benefits have been hurt.”

“I got primaried,” host Joe Scarborough recalled, “and the guy who was primarying me told me I was not conservative enough…Instead of hedging, I said: come on. I invite any conservative group to come in and support this guy, I will stomp the life out of you. I will humiliate you and drag your political carcass across Washington. And you know what? They stayed out, and I got 80% of the vote. Why are these people afraid of their shadows?”

Daily Caller writer Matt Lewis agreed, but came to the partial defense of the tea party.

“Some of the people who have been in the conservative movement in the Republican party for years are operating under an almost FDR paradigm,” he said, “where they are under the assumption, almost like a Moneyball thing, where conventional wisdom says you can’t dare go up against government, you can’t dare try to make government smaller, you’ll be destroyed. So some of this really is healthy. The new tea party folks—you take the good with the bad. There’s some naivete but we might find out that the world has changed and Americans are less dependent on government.”