Scarborough: Obama ‘Should Have Known’ GOP Was Radicalized When He Ran 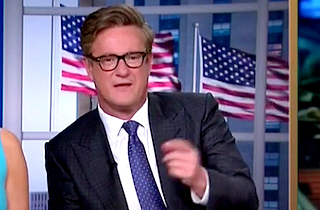 Morning Joe host Joe Scarborough said Tuesday morning that President Barack Obama “should have known” that he would have to deal with a “more radicalized” Republican Party from the moment he ran, and faulted Obama for not learning from the example of former President Bill Clinton — called it — even as his fellow panelists looked at him as if he were bonkers.

Scarborough’s remarks came after New Yorker editor David Remnick said that Obama has had to deal with a “more radicalized” GOP than even Clinton did.

“The president knew that when he ran, or he should have known that when he ran, just as George W. Bush knew that the Democrats would try to knock his head off from day one,” Scarborough said. “I think the biggest problem with the president was that he had not been in Washington long enough, and he came to the office a bit naive about what lay in front on him.”

RELATED: GOP: It’s Cool For Us to Treat Obama Terribly, Because We Were So Much Worse to Clinton

The panel pointed out that Clinton had not been in Washington for a moment, to which Scarborough replied, “By the time he got to Washington he had lost an election and gotten reelection, and had to deal with people who didn’t think like him, and that’s why he beat our brains in in 1994.”

“Bill Clinton was so successful he got health care done in his first term,” NBC News White House correspondent Chuck Todd said. “Bill Clinton didn’t become this impressive political figure to a lot of folks like you, Joe, until he beat impeachment, until you guys went for the kill and he killed you back.”

It was then that Joe Scarborough rather lost his temper. Watch it happen below, via MSNBC: