Scarborough on His Good Friend Chris Christie: ‘Nobody Thinks He Can Win’
Video

Scarborough on His Good Friend Chris Christie: ‘Nobody Thinks He Can Win’ 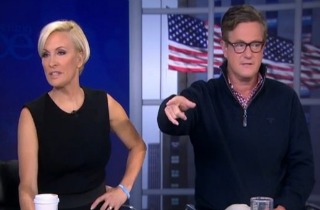 Did something happen to the infamous bromance between New Jersey Gov. Chris Christie and MSNBC’s Joe Scarborough?

On Tuesday, Morning Joe mulled it over, yet again, whether Mitt Romney can or will make another bid for the White House. Sizing up the potential Republican field of 2016 hopefuls, Christie and former Florida Gov. Jeb Bush had their names thrown into the mix.

Then Scarborough did to his friend Christie the equivalent of picking the fat kid last on his team for baseball.

“We ought to just say what– we ought to do what we do around here and say on the air what everybody says off the air in Republican circles,” Scarborough said. “No, I’m just going to say, if you want to know what Mitt Romney is thinking, nobody thinks Chris Christie can win.”

Christie may need to reconsider his personal relationships.