Scarborough On ‘Middle East & Arab World’: ‘They Hate Us’ Because Of Their Religion, Their Culture, And Peer Pressure 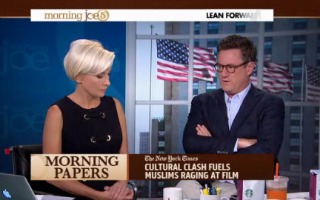 On Monday’s Morning Joe, host Joe Scarborough shared his two cents on why it is that so much tension exists between the so-called Muslim World and the U.S. It is most definitely not, he said, because of the “crude” Innocence of Muslims film, which is merely being used as an excuse.

Referring to a New York Times piece detailing how a “cultural clash fuels Muslims raging at film” and how “devout values conflict with free speech.” Scarborough disagreed with his characterization of the events abroad, sharing that “I don’t know if I would use the word ‘devout'” to describe what’s been happening.

Think about the savagery, just the sheer, unrestrained savagery that we have seen in the Middle East and the Arab world the past week because of a crude film. They know what they’re doing. They know it’s a crude film. They know it has nothing to do with the United States government. It is an excuse. one intelligence person told me, you just scratched the surface, and if you gave every street vendor from street vendor to prime minister in that region a chance to throw a rock at the U.S. embassy, they would. So this is their excuse.