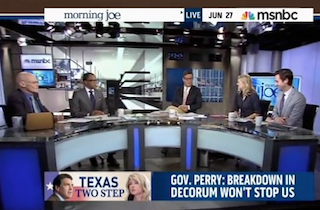 Joe Scarborough & Co. discussed Texas State Sen. Wendy Davis and the abortion debate on Thursday, weighing the polling on the issue as well as where Davis goes from here. Throughout the discussion, Scarborough also responded to those who felt the filibuster and protest was democracy in action. Were it a pro-life group storming the statehouse, he said, they’d be deemed an “angry mob.”

During the first portion of the segment, Scarborough pressed James Carville on how the polling shows that Americans are becoming more conservative when it comes to abortion — a point that Carville appeared hesitant to acknowledge.

What Davis did was spectacular, the roundtable agreed, with Scarborough comparing it to a Republican successfully filibustering in California. “Texas is moving purple,” he asserted. Carville countered that Georgia and South Carolina are certainly shifting faster than Texas is.

Jonathan Capehart turned his attention to the crowds of people who showed up in support. “The reason why the measure didn’t pass the first time, was because of all the cheering in the gallery,” he added. While Davis is the star and the central figure, he argued, those people at the statehouse were an example of “democracy in action.”

“I wonder what everybody would be saying on this network and others if those were all pro-life people running up the hill, following Michele Bachmann or — I’m just curious,” Scarborough hypothesized. “Would that be democracy in action or would it be an angry mob?”

“I think it would be called an angry mob,” he reiterated. “When it’s conservatives doing this, they’re an angry, unruly mob, and when it’s liberals doing it, it’s democracy in action.”