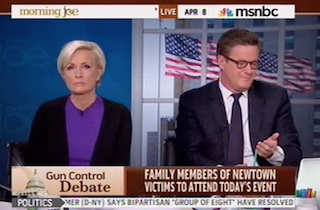 As Sen. John McCain (R-AZ) did yesterday, Joe Scarborough, too, opposed the GOP filibuster over gun control legislation. Unlike McCain, however, Scarborough vehemently argued in favor of background checks during Monday’s Morning Joe — incredulous that the GOP is basically allowing themselves to put “rapists’ rights over parents’ rights” to keep their children safe.

“I can’t believe that Republicans, first of all,” Scarborough asserted, “aren’t going to support it but, secondly won’t let background checks against rapists, people who have committed manslaughter in the past, people with mental illness, dangerous mental illness — I can’t believe those Republicans are going to allow the entire Republican Party to be the party that basically put rapists’ rights over parents’ rights to keep their kids safe when they go to school.”

Richard Haass argued that even with background checks, many people will want more than that. What we can hope for, he added, is that this isn’t the peak of the issue but just the beginning — that the issue will evolve, and lead to more progress on the gun control front.

That point was particular cause for concern for Scarborough, who noted that “Newtown is not going to end history.” Because Newtown won’t be last mass shooting. “Republicans, maybe they believe this is the end of history,” he argued, “but it’s going to happen again and when it happens again, and 92 percent of Americans have asked them to do something and they don’t do it, it’s going to have devastating political impact on everybody.”