Scarborough: Putin Wouldn’t Have Invaded Ukraine With Bush as President (in 2004)
VIDEO

Scarborough: Putin Wouldn’t Have Invaded Ukraine With Bush as President (in 2004) 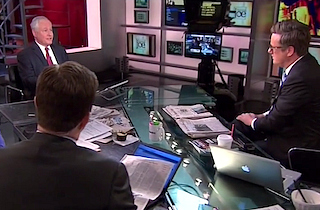 After agreeing that President Barack Obama had failed to demonstrate consequences for aggression in Syria, a Morning Joe panel comprising host Joe Scarborough, Weekly Standard editor Bill Kristol, and Bloomberg columnist Jeffrey Goldberg wondered whether forceful actions like the Iraq War had proved a better deterrent against foreign leaders like Vladimir Putin, or whether Putin was in fact taking advantage of America’s post-Iraq exhaustion with war.

“The question is, would Putin have made this move, say, in 2004, 2005 with George W. Bush president? Would he have believed he could have move with impunity then, the way he did, against Bush?” Scarborough asked. “I’ve got to clear this up for everybody else, so this isn’t a Bush versus Obama deal. George Bush was exhausted in 2008, and Putin made the calculated move that after seven years of war, he wasn’t going to step on the gas and get involved in something like that.”

“Let me answer it by analogy,” Goldberg said. “In 2003, when the U.S. invaded Iraq, the Iranians froze their nuclear program because they thought they were next. By 2004 and 2005, they saw America get bogged down in Iraq — because of terrible planning, among other things — and decided to restart and walked away from the nuclear negotiations.”

“So, yes, obviously, there is a demonstration effect we are talking about,” Goldberg continued. “Right now, if you’re a Putin or a Khomeini or an Assad, you do say, ‘Look, America is exhausted and it’s tired.'”