Scarborough Questions ‘Long-Held’ Beliefs After Newtown: ‘Ideologies Of My Past Career’ No Longer ‘Relevant’ 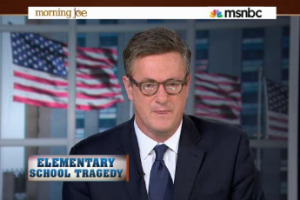 Joe Scarborough reflected on the school shooting in Newtown, Conn. on Monday with a monologue urging a search for answers. The MSNBC host said he stood by his libertarian beliefs — when it came to Hollywood and the First Amendment, and gun collectors and the Second Amendment — after past shootings. But after Newtown, “the ideologies of my past career,” he said, are “no longer relevant” to the future he wants and demands for his children.

Scarborough spoke of the “random acts of violence that seem to be getting less random by the day.” The violence we’ve seen “is being spawned by the toxic brew of a violent popular culture, a growing mental health crisis, and the proliferation of combat-styled weapons,” Scarborough detailed, noting the need to tackle each one of these causes, and bidding good luck to gun lobbyists and Hollywood lawyers.

“I am a conservative Republican who received the NRA’s highest ratings over four terms in Congress,” Scarborough said. “I come to you this morning with a heavy heart and no easy answers. Still, I’ve spent the past few days grasping for solutions and struggling for answers — while daring to question my own long-held belief on these subjects.”

I knew that day that the ideologies of my past career were no longer relevant to the future that I want, that I demand for my children. Friday changed everything. It must change everything. We all must begin anew and demand that Washington’s old way of doing business is no longer acceptable. Entertainment moguls don’t have an absolute right to glorify murder while spreading mayhem in young minds across America. And our bill of rights does not guarantee gun manufacturers the absolute right to sell military-style, high-caliber, semi-automatic combat assault rifles with high-capacity magazines to whoever the hell they want. It is time for Congress to put children before deadly dogmas.