Scarborough Rips GOPers Who ‘Scream’ And ‘Rant’ But Cave On Policy: ‘They’re Liberals’ 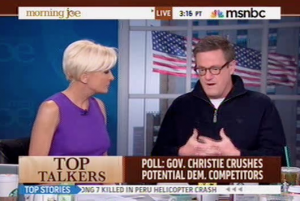 Wednesday morning brought another Chris Christie segment on Morning Joe — this time one that allowed host Joe Scarborough to segue into his seemingly endless criticism of his own party. Contrasting Christie’s governing style, Scarborough dug into Republicans in Washington, who he said are “liberals” when it comes to policy.

The segment then delved into some excerpts from the State of the State address the governor gave yesterday, in which he spoke about Hurricane Sandy’s effect on the state — and also said Washington could learn something about compromise from good ole Jersey.

Scarborough went on to note that Christie hasn’t compromised his values and he’s won his battles versus budgets and unions, but he doesn’t “vilify” Democrats. Yet in D.C., among those who follow the “conservative entertainment complex… actually working with the other side and winning is seen as a political sin.”

Christie really does “speak softly and carry a big stick,” he added. And he kept going:

But you look at the Republicans in Washington, it has long been my frustration that they’re just the opposite. They’ll scream, they’ll rant, they’ll rave. Talk radio hosts that are associated with them will scream, they’ll rant, they’ll rave. They’ll take a harsh, shrill tactic, the opposite of what Reagan did. And then when it’s number-crunching time, they’re liberals. They’re liberals. Let me make this point. They’ll scream and yell and insult the president. They’ll scream and yell and insult everybody else. […] They always talk so tough, they offend people, but they never follow up. If they followed up with conservative policies — pay down the debt over the past decade — I would be a bit more forgiving of their shrillness. But they’re shrill, and there’s nothing to back it up. There’s no real good conservative policy to back it up.