Scarborough Rips Into GOP Candidates On Afghan War: I Thought Civilians Ran Military Under The Constitution 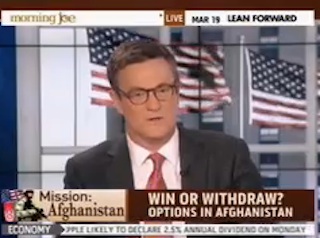 On Monday’s Morning Joe, Joe Scarborough shared his views about the direction of the war in Afghanistan, disagreeing with many of the Republican presidential candidates’ arguments about what “winning” the war means.

“Headline for all Republicans and Democrats that want to continue to fight this war: we won the war.” Scarborough exclaimed. “It was an anti-terror campaign. We went in to get Osama bin Laden. We went in to break up al Qaeda in Afghanistan where they launched the 9/11 attacks. We killed them. We routed them. We destroyed them. We didn’t go in to beat the Taliban. The Taliban is a different thing. Very different thing than al Qaeda. The Taliban doesn’t want to blow up buildings in Washington, DC, or New York or Charlotte or Atlanta. They want to be left alone to run their country by second century standards. We should let them.”

RELATED: Geraldo And Kilmeade Get Into Heated Argument Over Afghanistan: ‘They Will Never Evolve Into Americans’

“What is this, Willie?” Scarborough continued. “With all of these Republican candidates that are saying, ‘Oh, we’ve got to let the generals decide the number of troops that we’re putting in Afghanistan and how many more decades we stay there’ — I thought civilians were supposed to run the military under the constitution of the United States.”

“Well, it certainly is not a ‘profile in courage’ or a profile in great leadership,” Willie Geist observed as he criticized Senator John McCain‘s claim that another 9/11 will happen if US troops leave. “The Taliban lives there. They are going to be back. They’re going to grow again… al Qaeda may come back there. So do you stay another five years or 10 years or another 20 years? Who’s to say when it’s time to go home?”

Scarborough ripped Romney’s defense of staying in the country indefinitely.

“What’s the long-term difference between the United States of America leaving in 2012 and leaving in 2022? And the answer is, there is none. They’ll mutter on about — and Mitt Romney says, ‘oh, we’ve got to stay there long enough to prop up the Afghan army.’ I mean, our sons and daughters are dying. And in this case, committing horrific acts, in defense of the Karzai regime? Willie, how many decades do we need to stay there to prop up the Afghanistan government? One of the most corrupt governments on the planet.”

Scarborough’s lengthy criticism of the US mission in Afghanistan might be his most pointed yet.

Watch Scarborough and Geist’s analysis of the Afghanistan situation below, via MSNBC: