Scarborough Rips Obama For Reported Gitmo Overhaul (Instead Of Closing): ‘Not As Smart As You Thought You Were’
video

Scarborough Rips Obama For Reported Gitmo Overhaul (Instead Of Closing): ‘Not As Smart As You Thought You Were’ 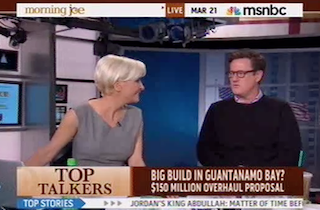 Upon reading a report that the Pentagon is considering a $150 million overhaul of the U.S. detention facility in Guantanamo Bay, Joe Scarborough bluntly voiced his disapproval, hitting President Obama for his promise to close the center. Recalling the criticism Obama had of his predecessor, Scarborough said the “self-righteous” president isn’t quite as smart as he thought he was.

He promised it would be closed a year from when he was sworn in, Scarborough reminded, because it represents everything that’s wrong with the country. If it’s so immoral, he asserted, then close it.

“If the president of the United States gets into office, and he realizes that it violates our most basic constitutional principles as a people, you don’t ask what the costs are,” he pressed on. “You do it.”

After Obama got the briefing, “you find out you’re not as smart as you thought you were when you were a state senator and then a two-year U.S. senator running for president — a guy that really didn’t do a lot of homework when he was in the U.S. Senate. Wasn’t quite as smart as he thought he was when it came to this, was he?”

That would apply to anyone, Mike Barnicle replied, prompting John Heilemann to assert that if the president makes such a promise, he should try to fulfill it.

“People say, ‘How could he say that?'” Scarborough jumped in. “Yes, every president goes into his job ignorant, all right. But not all go in as self-righteous as this president did, condemning the past administration as being immoral and being enemies of the United States constitution.”

Heilemann noted that point, but sought to point how complicated closing Gitmo is because of one big question: What do we do with the detainees?

No White House tours, but nearly $10 million for a “legal meeting complex,” Scarborough lamented. “If you’re gonna keep it, you may as well make it nice,” Mika Brzezinski quipped.