Scarborough Shreds Sen. For Caving To Minority In One Of ‘Saddest, Most Pathetic’ Votes ‘I’ve Ever Seen’ 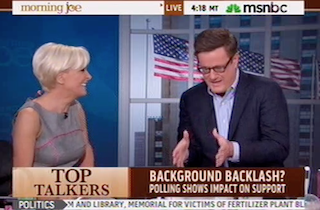 Joe Scarborough is often angry from 6-9 a.m. on weekdays. Some days more than others. Count today among “some days.” Today’s edition of Scarborough Outrage was dedicated very specifically to Sens. Kelly Ayotte (R-NH) and Heidi Heitkamp (D-ND). Yes, they both voted against background checks.

In Ayotte’s case, Scarborough displayed a hint of schadenfreude as he pointed to the recent decline in the senator’s approval rating. Her re-election may not be imminent, he contended, but “when any politician is in the low 40s and then slips into the 30s, that stays on you.” He further posited that, perhaps, Sen. John McCain (R-AZ), who came out in support of expanded background checks, could persuade Ayotte into doing the same.

Scarborough’s real frustration was saved for Heitkamp — particularly in light of the polling that showed 94% of North Dakota supported the measure. Not even buying that a true six percent would be opposed, Scarborough ranted against Heitkamp for “cowering in the corner,” fearing calls to her office from the four percent who oppose background checks. She’s “not tough enough to handle” that?

“This is one the saddest, most pathetic votes I think I’ve ever seen in Washington, D.C., what Heidi Heitkamp has done cowering in the corner because four percent, maybe five percent, of the people in her state were making phone calls that her staff had to answer,” he charged.

Deeming it “pathetic” and asserting that she “should be ashamed of herself,” Scarborough mocked, “Do you actually read the comments, like, at the end of blogs?”

Because listening to that “vocal minority,” he argued, is like caving angry commenters on blog posts.