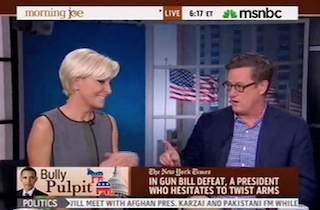 Pegged off a New York Times story about President Obama‘s lack of “appetite for ruthless politics that instills fear,” Morning Joe took to discussing the president political tactics on Tuesday. Joe Scarborough, citing his anger over the Senate failing to pass background checks, went after Obama for not confronting his own party and warning that he’d “destroy” them should they not vote the right way. Everybody, he lamented, was “weak.”

The Times story, singling out a president who “hesitates to twists arms,” notes:

The trip will also reinforce for Mr. Begich and his colleagues a truth about Mr. Obama: After more than four years in the Oval Office, the president has rarely demonstrated an appetite for ruthless politics that instills fear in lawmakers. That raises a broader question: If he cannot translate the support of 90 percent of the public for background checks into a victory on Capitol Hill, what can he expect to accomplish legislatively for his remaining three and a half years in office?

Scarborough offered to help the president, via some unsolicited advice. “Seriously, this is so easy,” he contended. “These Democrats, I’m only saying this because he has power over the Democrats: this president has got to lean in hard. And he’s got to twist arms. And he’s got to let every Democrat know that they’re on his list. And they will be every day.”

To those Democrats not voting his way, Obama needs to send the following message, Scarborough pressed:

“I’m going to figure out how I can screw you every single day. I am going to drive you into the ground politically. I’m going to destroy you. It is my goal to make sure that you regret you ever came to Washington, D.C. until you switch your vote.”

(Yes, that would certainly constitute a strong twisting of the arm.)

Mika Brzezinski brought up the White House defense of their approach, but Scarborough wasn’t having it. Steve Rattner agreed that he couldn’t imagine Obama threatening party members into voting his way. He couldn’t, as Scarborough suggested, imagine president telling them, “I’m going to pound your political bones to dust and laugh as it blows away in the wind.”