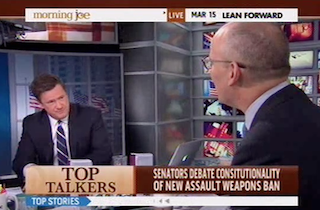 “Complete, utter ignorance about what the Second Amendment says.” That’s what Joe Scarborough took away from Sen. Ted Cruz‘s (R-TX) showdown with Sen. Dianne Feinstein (D-CA) over the constitutionality of the stricter gun laws she’s been advocating. Questioning what Cruz learned in law school, Scarborough was harsh and blunt in his criticism of the “willfully ignorant” Cruz.

RELATED: Ted Cruz And Dianne Feinstein Battle In Explosive Debate Over Gun Control In Senate: ‘I Am Not A 6th Grader’

“Did they teach Ted Cruz to read what the Supreme Court said, especially in the landmark, the landmark decision regarding Second Amendment rights over 200 years was written in 2008?” he asked. Why would he use his seat on the Senate Judiciary Committee to “to put forward a willfully ignorant statement about this bill violating the Second Amendment, because it does not.”

Going on to question what Cruz took away from his Harvard Law School education (while noting, not ironically, “I don’t mean to keep going on and on here”), Scarborough was shocked to see Cruz use his position to “mislead millions of Americans.”

Cruz’s “lecturing” Feinstein on how her bill violates the Second Amendment is “just false.” This is “fact.”

“We’re not really talking about constitutional jurisprudence,” John Heilemann noted, “we’re talking about politics.” (Of course we are.) Cruz is simply staking out his turf “in the sweet spot of the most conservative, most populist, most red-meat Tea Party elements of his party.” (And does so with “disrespect and impudence.)

“I don’t mind people being condescending to me,” Scarborough asserted. “But when you’re condescending and you don’t even have the facts right,” that’s a problem. Noting Feinstein’s reaction to the fiery exchange, Al Sharpton agreed that Cruz was “patronizing.”

The Supreme Court “didn’t say it gave you the constitutional right to have magazines that can shoot a hundred rounds and it didn’t say you can have automatic or semiautomatic weapons, which is what he tried to say in the condescending way,” Sharpton added. You can disagree with the court, the panel agreed, but you can’t just state it as fact.

He may be wrong on the facts, Willie Geist noted, but he’s on the right side of the vote for the time being.

“I would love for him to sit in a room filled with the parents of Newtown and make that stupid argument to them,” Mika Brzezinski asserted. “I feel sorry for people like him because they’re very limited.”