Scarborough Teaches Democrats How to Campaign on Obamacare
VIDEO

Scarborough Teaches Democrats How to Campaign on Obamacare 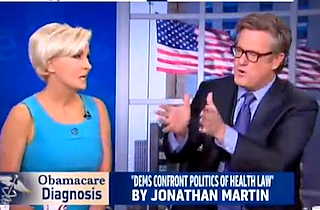 Now that the Affordable Care Act has cleared its early hurdles, there is renewed interest in whether Democratic candidates will campaign on it in advance of the 2014 midterms, especially as polls see as intensity gap that favors opponents of the law. Both MSNBC’s Chuck Todd and Morning Joe host Joe Scarborough argued Monday morning that they pretty much had to, and Scarborough, a critic of the law, proceeded to demonstrate how he thought it should be done.

RELATED: CNN’s King: ‘Where Are the Democratic Super PACs’ to Defend Obamacare?

“If you’re a Democrat candidate…make Republicans answer the question ‘Do they believe all Americans should have health care?'” Scarborough continued. “If I’m on the campaign trail, campaigning against you, and you start attacking me saying, ‘You don’t want all Americans to have health care. You want to make sure that mothers, at eleven o’clock at night when they have a sick child and they don’t know what’s wrong with their child, have to take their child to the emergency room and sit in the emergency room until two or three or four in the morning just to find out if their child is going to live. That’s your America!’ Suddenly you have Republicans on the campaign trail having to defend themselves.”

“That’s from a guy who’s against the law,” co-host Mika Brzezisnki said. “He can think of a way to spin it. Seriously.”