Scarborough to Hillary: Stop Playing Games! ‘If You Want to Run, Then Run!’
video

Scarborough to Hillary: Stop Playing Games! ‘If You Want to Run, Then Run!’ 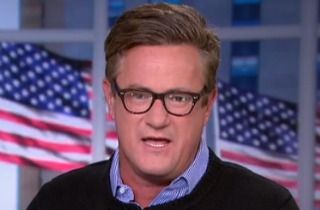 Hillary Clinton was in Iowa this past weekend because she is TOTALLY NOT RUNNING FOR PRESIDENT. No, seriously, she’s been on a months-long book tour, and she’s in the state all presidential candidates are required by law (technically not, but doesn’t it feel like they are?) to go to in order to kick off a presidential campaign, but just to be absolutely clear, she has NOT made up her mind about running for president yet. On Morning Joe today, however, Joe Scarborough basically just lost it and went off on Clinton, as well as Jeb Bush, for “playing games” about potential presidential runs instead of just being upfront and honest about their ambitions.

What Clinton has been doing, Scarborough said, “is why Americans hate politics.” He got really teed off at the calculating going on in the Clinton camp, and called Hillary a “robot” who acts with no creativity of spontaneity.

Scarborough unloaded all of his frustrations with Clinton and Bush for dragging the media along, even invoking ISIS to make the stakes incredibly clear:

And, he added, if they don’t plan on running after all, “get the hell out of the way!”

Clinton said recently she’d be making her decision “around probably after the first of the year.” Clinton made her 2008 campaign official in January 2007, so with any luck we’ll only have four more months of this teasing…