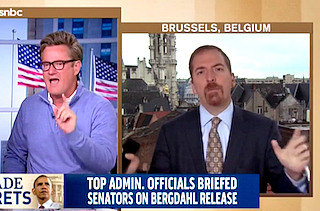 Morning Joe host Joe Scarborough erupted Thursday morning during a discussion of the father of freed Army Sgt. Bowe Bergdahl, arguing that Robert Bergdahl had given his son advice that had endangered other American soldiers, while NBC News chief White House correspondent Chuck Todd pleaded with him not to judge the parents whose son had been missing for five years.

“I keep holding up this image where Barack Obama has his arm around a man who is reaching out to pro-Taliban forces, talking about killing Americans,” Scarborough said.

RELATED: Kilmeade to Bergdahl’s Dad: ‘Don’t Have to Look Like a Taliban Member’ Anymore

“I have a 26-year-old son, and if my son is out on the wire and he is out there with fellow troops and he is writes me up and says he hates America and he’s thinking about deserting and he’s thinking about leaving his post, I can tell you as a father of that 26-year-old or 23-year-old son, I’d say, ‘Joey, you stay the hell right there,'” Scarborough said. “I would call his commander, I would say ‘Get my son. He is not well. Get him to a military base in Germany.’ I would not say ‘Follow your conscience, son.’ I would not reach out to the voice of jihad.”

“I’m not backseat driving how someone parents,” Todd replied.

“That is not backseat driving,” Scarborough said. “I am a father. Any good father would not tell their son to follow their conscience and leave men and women on the line.”