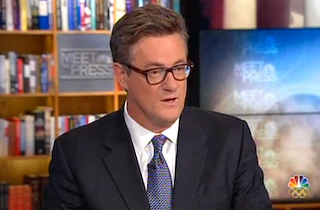 On Meet the Press Sunday morning, MSNBC’s Morning Joe host Joe Scarborough discussed the “battering” the Republican brand has taken at the hands of the tea party candidates, who flare into view via strong ideological beliefs only to cost the GOP major electoral victories.

“It’s not about compromise, it’s not even about ideological moderation,” Scarborough explained. “It is, though, about political moderation. You’ve got to be relevant to the center of America. People forget this, but Republicans used to be the party to beat. Every four years Democrats would pull their hair out because they knew we’d figure out how to reach the middle of America…We’ve lost that.”

Host David Gregory asked what Scarborough intended to do about the “nominating wing” of the GOP, which often selects during primaries more ideologically conservative candidates who can’t compete in general elections.

“But that’s not the nominating wing of the party,” Scarborough said. “Those sort of candidates you had in 2012, they come out early on, the media loves to talk about them for a year and a half, they go out and do pretty well in Iowa and New Hampshire. And then when the snow starts to fade away in Iowa, these candidates start to fade away, they turn south and they go back to the midwest, and they never win. Our brand’s been battered.”

The former congressman had a dire warning for conservatives who didn’t moderate their tactics.

“I say this to my very conservative friends,” he said. “We’ve got to figure out a way to move forward together. Or else you’re going to have Hillary Clinton for two terms. You’re going to have Barack Obama and Hillary Clinton picking supreme Court justices for six years and shaping the way our federal government’s run. That will transform government for fifty years.”